My Name is Eunice Jung 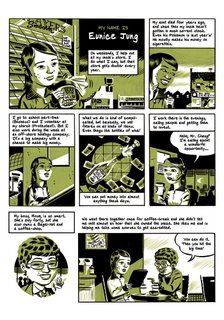 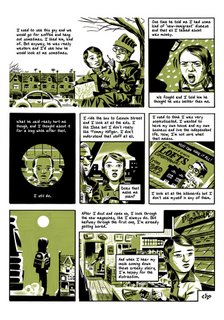 This is actually a story I wrote years ago, which I recently revisited and re-drew. Like "Night Time", the other story posted on my blog, it was originally published in the local magazine, Taddle Creek as their "illustrated fiction" feature. Recently, the very excellent Korean comic publisher, Sai Comics, contacted me with an offer to reprint this and some of my other comics for Korean audiences (and translated into Hangul!) in their anthology series. Well, after seeing some of the other comics going in the same book, and after taking a look at how badly I drew and lettered this years ago, I decided to re-do most of the artwork before allowing it to be published again.

Now normally I wouldn't redraw old artwork, since its like going backwards, but this time I thought might be fun. Especially since the story was only 2 pages long and really simple. I was fairly happy with the results, and it was actually a nice break to work on from the longer stuff I'm drawing now.
Posted by Michael Cho