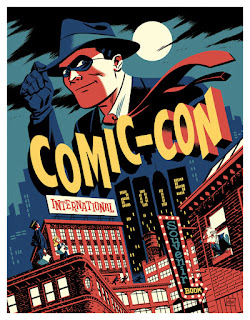 I'll be a guest of the San Diego Comic Con this year, enjoying another trip back to California.  I'll be set up at a table for the first time ever, which should be fun.  Here's some details for those interested:

Table Location:
Artists Alley - table II-16
I'll be set up in Artists' Alley selling prints, copies of my book "Shoplifter" and signing and sketching at the show.  Come by and say hello.

Signing with CBLDF
Saturday, July 11th, 1pm - 2pm
CBLDF booth, main show floor
I'll be signing books and doing a few sketches at the CBLDF booth, with all proceeds going toward their fundraising.

Will Eisner's The Spirit at 75
Saturday, July 11th, 4pm -5pm
Room 23ABC
As part of the celebration of Will Eisner's the Spirit on it's 75th anniversary, I'll be appearing on a panel discussing Eisner's creation.  Moderated by Dennis Kitchen and featuring Paul Levitz, Dan Didio, Nick Barrucci and Matt Wagner.

You Can't Draw That!  Live Art Jam
Sunday, July 12th, 12:15pm - 1:45pm
Room 5AB
I'll be drawing live and discussing censorship in comics as part of a live drawing and auction event with all proceeds going toward the CBLDF.