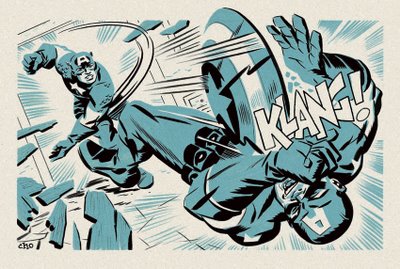 Continuing on my recent theme of favourite childhood superheroes:

I don't know about you, but these days when I mention I like Captain America to non-comic readers, they often look at me like I'm insane. They can accept Spider-man and Batman because of the recent movies, but to many of them, the idea of a guy running around wearing a flag and being patriotic seems hopelessly old-fashioned and ridiculous. Or worse: ultra-conservative and jingoistic. And certainly some of the Captain America comics I've seen recently don't help the point. I read one where he threw a terrorist bad-guy to his death from a train. After that, I closed the comic and threw it away.

But it wasn't always this way. The Captain America I read as a kid was a Kirby super-hero! That meant he stood for truth and justice, not trash-talking and revenge. And he was always the underdog in those stories, always taking a pounding and always struggling against impossible odds to show how anyone with will and determination could find a way to triumph against oppression and injustice. He didn't kill any one. He fought fascists. What more can I say? It was good adventure stuff for a kid to read and grow up on.
Posted by Michael Cho